WordPress 4.5 is now live! For a full recap of the changes in 4.5 visit this link.

The biggest changes you will notice when working in your site is the linking functionality in the editor. It is now an inline interface instead of the tradition popup:

Besides this change, most of the updates are behind the scenes and will not be noticeable to most users. Please be aware that this update has caused a lot of incompatibility issues. jQuery is breaking on many sites that were coded poorly. You will see this by noticing that your sliders are no longer working, dropdowns don’t show and parallax sections are not functioning correctly.

Remember to make a good backup before updating!!

Have you received the email from GoDaddy with the subject: Alert: hosting account approaching resource limits?
If so, you may be a victim of GoDaddy’s scheme to get more money out of their customers without any real reason. At wpONcall, we are in the unique position of seeing the performance and support from a lot of different hosting providers. One common thread that keeps popping up is with our clients who use GoDaddy hosting. Almost every single one has received the following email: 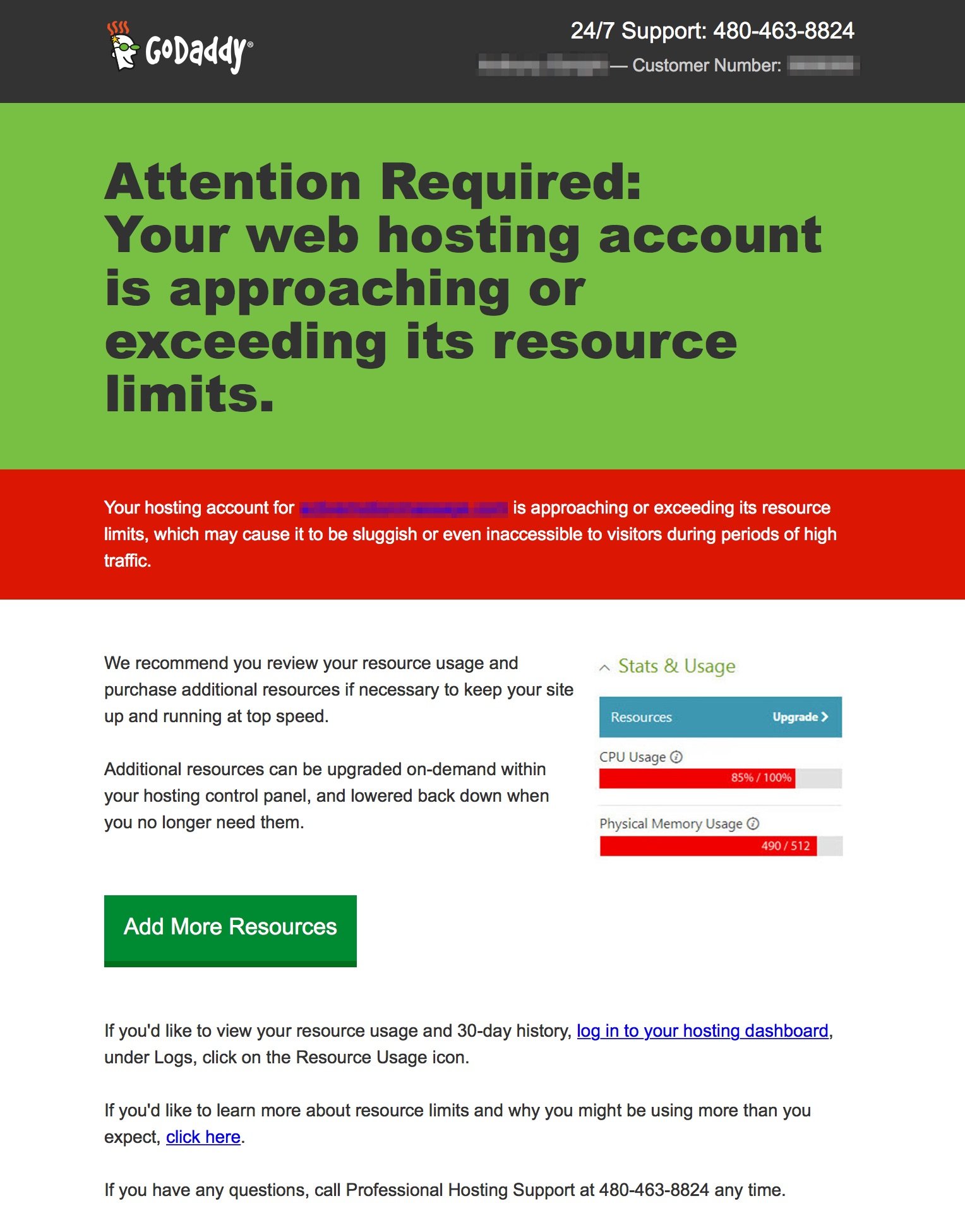 The curious thing about this email is that it is coming to clients who have very simple websites and/or very low traffic. There is no reason they are using abnormal resources. Calling GoDaddy does not help either. They will simply say: It’s a WordPress site with plugins. There must be a plugin that is causing the spike in server usage.

Using GoDaddy’s own P3 plugin, you will be able to see what plugins are using the most resources, although it is not helpful in seeing the actual amount of server resources a particular plugin uses.

It is just our opinion, but it really does seem like this is a scheme to get more money out of customers by scaring them into thinking their site will not work with the limited resources. This conclusion comes as a combination of:

All of these points make me think that there is something more going on than meets the eye. So what do you do if you get this email from GoDaddy? You have two choices: either upgrade your server resources at GoDaddy or change your host. Along with many other reasons, we recommend you change your host to one that will not extort money from you.

With WordPress version 4.3, a new feature called “Formatting Shortcuts” was introduced. WordPress formatting shortcuts works a lot like a markdown editor where you can add formatting as you type without having to add from the toolbar later. We have created a cheat sheet infographic to make it easier for you to take advantage of this feature. A few notes to help you out: 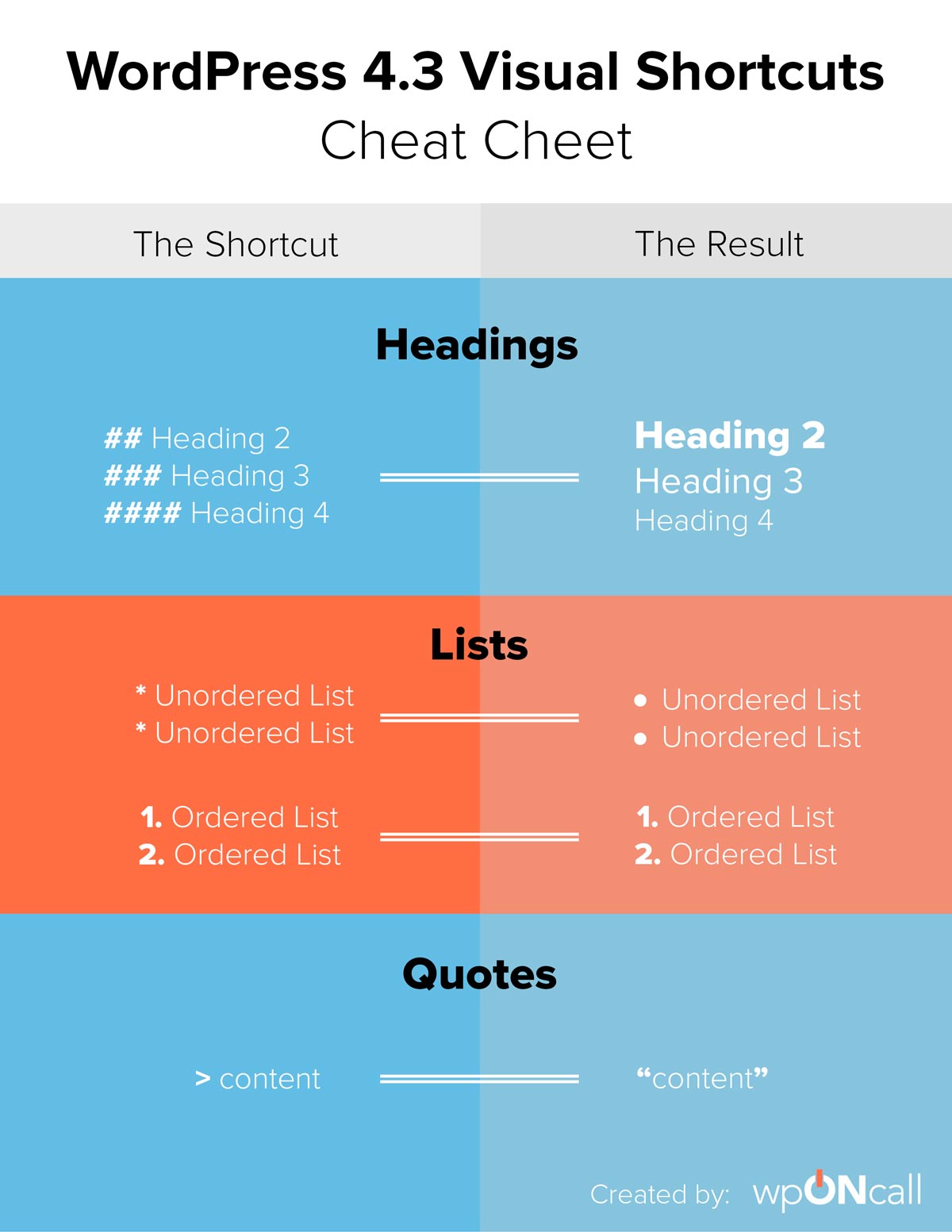 There has been huge growth in the number of hosts offering “managed WordPress” hosting in the past year. Just about every major host now offers managed WordPress hosting. So why would you need WordPress maintenance (from a company like us) when your host can take care of the same WordPress upkeep? Because these are vastly different services. Today we will look at what each service offers and the pros and cons of each.

What do you get?

Why would you need it?

Well, you need some type of host, right!? Might as well be a WordPress specific host that knows the ins-and outs of WordPress and is configured for the best security and performance. WPEngine is a great host, but there are other much cheaper options that perform even better (ie. SiteGround).

Managed hosting’s biggest selling point is updating WordPress for you. Unfortunately, this is a bit overrated. They will force you to update WordPress, whether or not your site is ready and they will not ensure that your site is functioning properly after the update. Their update is the equivalent of you or I logging into WordPress, hitting update, and leaving without checking anything. This is not worth the premium they are putting on their hosting package.

For all the bashing of WPEngine I have done, they are still a decent host, although overpriced. The pros of going with WPEngine are:

There are a few quirky things you have to deal with when using WPEngine:

What do you get?

I am going to be biased here and talk about our own company, wpONcall. We will discuss our primary product, which includes unlimited support.  This package is $149 per month. You get:

Why would you need it?

Unlike managed hosts like WPEngine, you can use wpONcall for any website task. This includes making content updates, adding plugins, fixing issues and making improvements to the site. The unlimited support is like having a web designer on your team to make your site better. This is in contrast to a manage host who will not help with any request except those directly related to hosting (ie. the site is down and I need to see if it is a server issue). You need a WordPress maintenance company to improve your site over time.

WordPress maintenance is also important to keep the health of the site in top shape. Keeping plugins up to date is extremely important for security and backups that can easily be restored are imperative, even if your host also makes a backup.

Although they may seem similar, WordPress maintenance companies have a completely different product than managed hosting providers. Hosting providers are just that – hosting companies with an emphasis or marketing spin to sound better to WordPress site owners. WordPress maintenance providers fill the need of site owners who need ongoing help with their site and want to know things are safe and functioning properly.  One cannot replace the other, it all depends on the level of your needs and how much help you need on a consistent basis with your site.

Backups have always been a pain for WordPress site owners.

Backups stall, error codes come up, it’s hard to restore your site, you use up all of your storage; the list goes on and on. In this post, we will look at what is wrong with the current state of WordPress backups and then look at the new generation of backup options: incremental backups.

Current backup plugin options (like BackupBuddy) have flaws including:

What are Incremental Backups?

Incremental Backups work in the same way as Apple’s TimeMachine. Every change you make is automatically stored, so you can revert back if needed. Instead of backing up your entire website file structure and database every time you make a backup, these plugins will only backup the change that you have made. This is very similar to how Dropbox and GitHub work, with file versioning. Some of these new incremental backups are even using Dropbox to power the file versioning.

What are the Benefits?

You will no longer have issues with backups timing out because only small updates are being saved each time. This makes your backups more reliable and less resource intensive on your server. Another benefit is the ability to make restores of the site if anything breaks or needs to be reverted. Instead of restoring the entire website, only the files that have changed will be reverted.

Here is a real world example: You go an update a plugin on your site. After you made the update, you notice that all of your site styling is off. Instead of reverting your site to a full backup (which you probably did not make to do a plugin update), you can simply revert your site back to where it was before you made the plugin update. This will take a lot of stress out of making plugin updates!

What Are The Options?

BlogVault has been around for awhile and offers a unique incremental backup solution that does not add excess strain on your server (therefore being more successful with each backup. They also have other useful tools such as WordPress migration, staging and a white label version.

From the guys behind InfiniteWP, WP Time Capsule is one of the first standalone plugins to offer incremental backups. It is a free plugin with a Pro version coming soon. This plugin works with Dropbox’s revision history to create and restore versions of your site. You hookup your DropBox account and the backups are made behind the scenes. The pro version will include:

If InfiniteWP rolled this new plugin into their existing platform, they would have a game-changing product.

ManageWP is releasing a new version of their software, called Orion, in the (hopefully) not too distant future. Part of their new platform is incremental backup functionality. They are addressing the problems mentioned above such as using less server resources and having a more reliable backup solution.

The downside is this will only be part of their ManageWP platform once it is released to the public. There will be no standalone plugin you can use like WP Time Capsule.

VersionPress is a plugin that uses Git to record each change you make to your site. Positioned more as a developer product (rather than consumer friendly), VersionPress will require a bit more setup and knowledge of Git to be used. This is a premium plugin starting at $50, but does incorporate a lot of the functionality that makes incremental backups great.